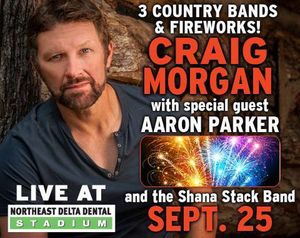 The Shana Stack Band is having an amazing year thus far.

The band was named the 2015 New England Music Award, Band of the Year and the 2015 Limelight Magazine Award, Country Artist of the Year.

The band has just learned they will now be performing their first stadium show.

Presented by the New Hampshire Fisher Cats​ and the Palace Theatre, The New England Music Awards​ Band of the Year, will be opening for Craig Morgan and Aaron Parker at the Northeast Delta Dental Stadium on Friday, September 25.

The Shana Stack Band takes the stage at 7:00 PM.

Get your tickets today by visiting:  https://www.ticketreturn.com/prod2/Buy.asp?EventID=147247#.VempqpcnXVK