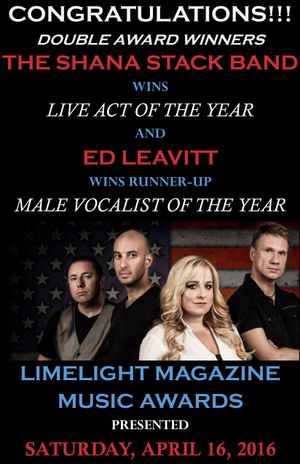 The Shana Stack Band, comprised of all New Hampshire and Vermont musicians (Shana Stack, Ed Leavitt, Kurt Ekstrom and Alec Derian and Peter Henault), was nominated in the Live Act of the Year category and the male vocalist, rhythm guitarist and the songwriter of the group, Ed Leavitt was nominated for Male Vocalist of the Year.  The Limelight Magazine Music Awards received hundreds of perspective nominations and narrowed the field down to 16 categories and chose only 8 artists/groups to be represented in each category. They also chose Shanna Jackman to receive their Unsung Hero Award.  Jenna Lotti was the Master of Ceremonies for the awards show assisted by Chris Facey.

At the awards ceremony presented at The Spire Center for Performing Arts in Plymouth, NH, Saturday evening, Ed Leavitt was named runner up for Male Vocalist.  Later in the evening The Shana Stack Band was announced as this year’s Live Act of the Year for the 8th Annual Limelight Magazine Awards.  The Shana Stack Band members were thrilled about the news.  Shana Stack Davis and Ed Leavitt accepted the award on the bands behalf.  Shana spoke to the audience with sincerity with “Thank you for everyone that voted.  Congratulations to all of the nominees and winner from the 8th Annual Limelight Magazine Awards."  Ed Leavitt had to jump in quickly and recommend the restaurant down the street with the amazing pretzels.  The audience all laughed and clapped for their newly named Live Act of the Year.

The list of awards The Shana Stack Band has won over the last few years range from Country Band of the Year and the Fans Choice Award by the Independent Country Music Association, to Wiles Magazine's World's Best Indie Artist to their awards for Country Act of the Year by the New England Music Awards and Country Artist of the Year by Limelight Magazine.  The band was also named Band of the Year by the New England Music Awards in 2015.  The band never takes these awards for granted and realize it is the fans and their family that are the drive behind their success.  "Winning awards is great, but what these awards really show, is that our fans and the music industry really approve of what we are doing.  The fans are really what make this adventure fun, exciting and sincerely rewarding.  We look forward to doing what we love, making music, for years to come.”

The band has released 4 albums in the 5 years they have been together, "Then and Now" 2014, "Every Now and Then" 2013, "What You See Is What You Get" 2012 and "You Can't Make Me Fall" 2011. The band is entering the studio this upcoming weekend to prepare songs to release as a digital download cd. The band is looking forward to another successful year, traveling all across New England to perform for their fans.  They have opened for Country Superstars such as Reba McEntire, Sugarland, Travis Tritt, Rascal Flatts the Band Perry and Little Big Town.  The opened on the main stage at the Bank of New Hampshire Pavilion in 2015 for Toby Keith.

Congratulations again to The Shana Stack Band on their latest award and their continued success as a band to watch in New England.