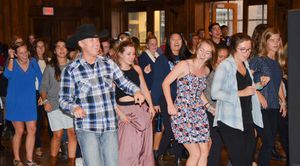 For her friends, Summer Hammond ’17 was the essence of positivity, especially in difficult situations. She was a person who not only preached it, but truly lived it. Hammond died in July following a period of treatment for cancer. On Wednesday, members of the Dartmouth community gathered in Rollins Chapel for a memorial service to honor and celebrate her life.

“Although it was mainly just sophomores on campus, we did not want to wait until the fall term to remember [Hammond],” Gallup said. At the first memorial, friends shared stories about Hammond and walked a lap around Occom with lighted sparklers in remembrance of her, Gallup said.

Budler, Cunningham and Gallup attended the Hammond family’s memorial service in Colorado this summer, and they were inspired to organize something similar for the Dartmouth community.

Budler said that she loved the memorial in Colorado because it was an embodiment of Hammond’s spirit. She said that Hammond was as close to a saint as anyone could be and her legacy was one that was worth recognizing.

For Budler, the goal of the campus memorial was to represent the various parts of Hammond’s life and to bring the positive spirit of the service in Colorado to campus, particularly for those who could not attend.

“This memorial is a launching point and an opportunity for us to reflect on who she was and for us to start living that way,” Budler said.

Similarly, Gallup said she hoped that the memorial would be a positive celebration of Hammond’s life with a respectful amount of time for mourning, solace and memories.

“I really hope that everyone can come together and completely forget about all of our busy lives and recognize how important this is for [Hammond],” Gallup said. She deserves so much respect and honor for what she did in this life.”

At the memorial, Hammond’s fellow members of Kappa Kappa Gamma sorority wore blue ribbons in their hair in honor of Hammond. Photos of her were mounted along the chapel’s interior.

Hammond’s freshman trip leader Anoush Arakelian ’14 opened the service by welcoming the Dartmouth community and Hammond’s family. Arakelian encouraged everyone to incorporate Hammond’s excitement and positivity into their lives, which is something she said that Hammond would have wanted.

College President Phil Hanlon followed with a reflection on Hammond’s life and her impact on the Dartmouth community. Hanlon stressed that though he could not precisely tell her friends and family how to cope with Hammond’s loss and how to understand her death, her brightness will continue to shine and her eternal optimism in the face of struggle will be remembered.

After Hanlon’s remarks, several of Hammond’s college friends came up to share memories and reflect on her life.

Budler described Hammond as an ideal role model, regardless of her class year.

For Budler, the question was about what to do now that their mentor is no longer physically present in their lives.

“There is a hole where [Hammond once was],” Budler said.

Moving forward, Budler added that the way to fill in those holes is remembering Hammond’s legacy and holding on to the words of wisdom that she imparted while alive.

Throughout Hammond’s time at Dartmouth, she was a member of Kappa and the women’s club soccer team. She also traveled to Argentina on a foreign study program, raised money for the annual Prouty fundraiser for cancer research and participated in Relay for Life.

Hailey Carter ’17 and Rachel McKee ’17 spoke on behalf of Kappa and shared Hammond’s impact on their respective lives.

“[Hammond] valued her words and never engaged in empty conversation,” McKee said. “She spoke with purpose. [Hammond] was bold and wasn’t afraid to say that you could be better.”

Hammond’s club soccer teammate Amanda Flugstad-Clarke ’15 remembered her as the most dedicated, positive and passionate member of the team. Regardless of whether Hammond had chemotherapy treatments, she attended every practice she could, Flugstad-Clarke said.

“Even when she was at her weakest, [Hammond] was still the strongest person I ever met,” Flugstad-Clarke said. “True courage is having the strength to be brave when your future is uncertain.”

Dick’s House director of clinical medical services and assistant professor at the Geisel School of Medicine Ann Bracken and assistant dean of undergraduate students Larissa Hopkins both said that the Dartmouth community will now ask themselves “what would [Hammond] do” when making hard choices.

Bracken added that one of the reasons why Hammond was able to accomplish everything that she did was because of the support of her “amazing” parents. Hammond’s parents did not make her feel limited in what she could accomplish, Bracken said.

Gallup and Cunningham were the last students to speak at the service.

“I am eternally grateful for the two years I had to get to know this special girl,” Gallup said. “There was something about her that made you feel so special when you were with her.”

Cunningham recited Maya Angelou’s poem “When Great Trees Fall,” and called for a moment of silence to honor Hammond. She encouraged everyone to use the silence to appreciate their lives and their friends.

Hammond’s mother Sharon Hammond offered concluding words for the memorial service and thanked the Dartmouth community on behalf of her daughter.

“[Hammond] would be grateful for your friendship and treasured times,” Sharon Hammond said.

She added that Hammond would also remind everyone that there should not be any crying in a celebration of life.

Immediately after the service, a reception was held in Collis Common Ground that included a slideshow, light refreshments and memory letter writing. The culminating part of the reception was line dancing to music from The Shana Stack Band — inspired by Hammond’s love for country music and pulling her friends onto the dance floor at parties.

At the reception bracelets were distributed by Kappa members, which were printed with the words, “Forever Positive — Summer’s Way.”