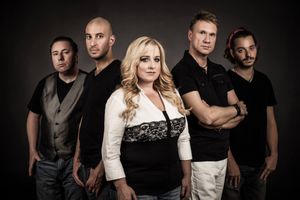 It’s not Taylor Swift or Zac Brown Band, but a local version of Fenway Park and Gillette Stadium’s blockbuster summer concerts happens when Craig Morgan appears at Northeast Delta Dental Stadium in Manchester. The performer of country hits like “That’s What I Love About Sunday,” “This Ain’t Nothin’” and “International Harvester” will be joined by Aaron Parker and local favorites Shana Stack Band.

2015 is shaping into Shana Stack and songwriter/co-lead vocalist Ed Leavitt’s favorite year. The southern New Hampshire quintet won multiple awards and played its biggest shows yet, including opening for Toby Keith at Bank of New Hampshire Pavilion at Meadowbrook.
“The main stage, that’s always been one of our goals,” Stack said in a recent interview. “It was surreal … a dream come true.”
Leavitt concurred and recalled seeing Mary Chapin Carpenter at one of the venue’s earliest shows in the mid-1990s.
“I’ve seen it grow all these years,” he said. “This was our fifth year back; they told us, ‘You’ve worked so hard for us, we think you’ve earned this spot.’ We were thrilled and honored.”
The year’s magic began on New Year’s Eve. During a gig at the Sheraton Boston, a representative from the New England Music Awards called with news they’d been nominated for Band of the Year. In 2014, the group won the NEMA for best country band, but the current honor caught Leavitt off guard. He greeted the news with gratitude and a belief that it would end there.
“When we were nominated and I saw the others, I thought to myself, we’ve lost this one already,” he said. “I’m a fan of some of these bands. Twiddle for instance; I’ve seen them in concert several times and they’re incredibly awesome and so tight and traveling all over the country. We were humbled.”
Stack felt like her band had cracked a glass ceiling of sorts.
“It was good to see a country band get that recognition,” she said.
In some ways, the nod also reflected the genre’s mainstreaming — the group’s most recent record, 2014’s Then & Now, is closer kin with Lady Antebellum than Loretta Lynn.
Fast forward to the April awards ceremony. When they heard their name called as the winner from the stage at Patriot Place, shocked doesn’t begin to describe their reaction.
“Even after we were standing on stage with the plaque in our hand making our acceptance speech I thought, there’s been a mistake here,” Leavitt said.
They also won a Limelight Award for Country Act of the Year and continue to ride the positive wave generated by the current record, now a year old.
The group hopes to release a new single later this year and, if time allows, make a music video.
“We really want to do it,” said Leavitt, “but as soon as we get someone interested we’re back on the road.”
It’s a happy chaos, however.
“We’ve been so busy this year it seems like one big blur,” said Stack. “We were talking as a band the other day — we look at Facebook posts and scroll through pictures on our phone and it almost seems like we’re watching someone else. We’ve been so busy we don’t remember some things. We’ve been constantly on the run, so it’s fun to reflect back on it.”