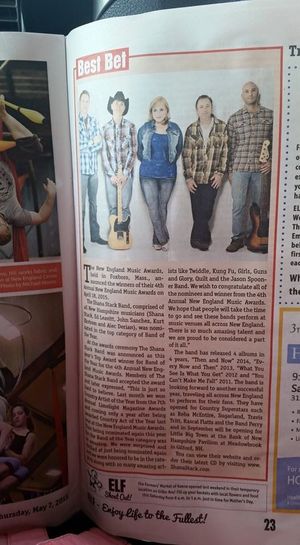 The Shana Stack Band, comprised of all New Hampshire musicians (Shana Stack, Ed Leavitt, John Sanchez, Kurt Ekstrom and Alec Derian), was nominated in the top category of Band of the Year.

At the awards ceremony The Shana Stack Band was announced as this year’s Top Award winner for Band of the Year for the 4th Annual New England Music Awards.  Members of The Shana Stack Band later expressed, “This is just so hard to believe.  Last month we won Country Artist of the Year from the 7th Annual Limelight Magazine Awards and coming only a year after being awarded Country Act of the Year last year at the New England Music Awards. Then being nominated again this year for the Band of the Year category was so amazing.  We were surprised and thrilled at just being nominated again and we were honored to be in the category along with so many amazing artists like Twiddle, Kung Fu, Girls, Guns and Glory, Quilt and the Jason Spooner Band.  We wish to congratulate all of the nominees and winner from the 4th Annual New England Music Awards.  We hope that people will take the time to go and see these bands perform at music venues all across New England.  There is so much amazing talent and we are proud to be considered a part of it all.”