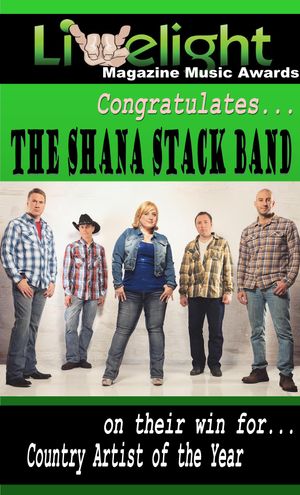 The Shana Stack Band, comprised of all New Hampshire musicians (Shana Stack, Ed Leavitt, John Sanchez, Kurt Ekstrom and Alec Derian), was nominated in the Country Artist of the Year category.  The Limelight Magazine Music Awards received hundreds of perspective nominations and narrowed the field down to 15 categories and chose only 8 artists/groups to be represented in each category. They also chose the band "New England" to receive their Legend Award and "Robin Lane" to receive their Unsung Hero Award.  Ashley Jordan was the Master of Ceremonies for the awards show.

At the awards ceremony presented at The Spire Center for Performing Arts in Plymouth, NH, Saturday evening, The Shana Stack Band was announced as this year’s Country Artist of the Year for the 7th Annual Limelight Magazine Awards.  The Shana Stack Band members were thrilled about the news.  Shana Stack Davis, Ed Leavitt and Kurt Ekstrom accepted the award on the bands behalf.  Shana spoke to the audience with sincerity with “Thank you for everyone that voted. I want to introduce this man right here, he is a genius, Ed Leavitt.  He is our songwriter.  We have put out 4 original albums in the last 4 years.  This is Kurt (Ekstrom) our drummer, I'm Shana.  Nice to meet you all.  Thank you everyone who voted.  And thank you to a very special guy in the audience, Conrad Farnham, we call him our Honey Badger, he's our Manager and he works wonders, we love him.  So thank you very much.”  The Shana Stack Band is appreciative of all of the support they receive during the year.  “Being awarded Country Act of the Year last year at the New England Music Awards and being nominated again this year for the Band of the Year is such an honor.  We were surprised and thrilled at just being nominated for a Limelight Award and we were honored to be in the category along with so many amazing artists like Ben Cesare, Kate Cameron, Matt Casey, Alec MacGillivray, Katie Perkins, Marian Rose and congratulations to Brianna Grace for being awards the Runner Up in the Country Artist of the Year category.  Congratulations to all of the nominees and winner from the 7th Annual Limelight Magazine Awards."

The list of awards The Shana Stack Band has won over the last few years range from Country Band of the Year and the Fans Choice Award by the Independent Country Music Association, to Wiles Magazine's World's Best Indie Artist to their awards for Country Act of the Year by the New England Music Awards and now Country Artist of the Year by Limelight Magazine.  The band never takes these awards for granted and realize it is the fans and their family that are the drive behind their success.  "Winning awards is great, but what these awards really show, is that  the fans and the music industry really approve of what we are doing.  The fans are really what make this adventure fun, exciting and sincerely rewarding.  We look forward to doing what we love, making music, for years to come.”

Congratulations again to The Shana Stack Band on their latest award and wish them luck on their nomination for Band of the Year for the New England Music Awards which will be held at Showcase Live in Foxboro, MA on Saturday, April 18, 2015.